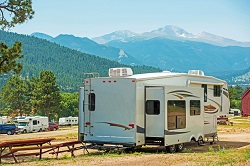 A couple is planning to tour the United States in a travel trailer during their first few years of retirement. They are going to sell their current home now and purchase another home when they finish their travels.


An interesting exercise is to determine the optimum time of selling the home: now or when they're ready to buy their replacement home.


If they intend on traveling for more than three years, then, it may be a good decision to sell prior to the sojourn to avoid paying taxes on the gain in their home. IRS allows for a temporary rental of a principal residence while still keeping the $250,000/$500,000 capital gains exclusion intact. A homeowner must own and use a home for three out of the previous five years which means that it could be rented for up to three years, but it would need to be sold and closed before that three-year window expires.


If the travel will be less than three years, there is an option of selling now or later. Using the example below, the homeowner sold the home, paid their expenses and invested the proceeds in a three-year certificate of deposit until the replacement home was purchased.

As an alternative, if the homeowner rented the home, not only would they have income, the home would continue to appreciate and the unpaid balance would go down resulting in larger net proceeds. Based on a 5% appreciation and continued amortization of the mortgage, the net proceeds could easily be $40,000 more.???

Obviously, there are a lot of considerations that affect the decision to sell now or later but in an appreciating real estate environment, being without a home for several years could affect the financial position of the owner in the replacement property. It is certainly reasonable to look at various alternatives before making a decision. Call me at 941-315-3331 to help you look at the different possibilities and please talk to your tax professional before making any decisions.

To continue searching, you must agree to the Terms of Use.

For the best experience, please provide your cell phone number and select accept below to opt-in to our Terms & Conditions and Privacy Policy to begin receiving text and voice communications.

or make a new notebook

Search the full MLS and Exclusive Property Listings.
(Prices and inventory current as of February 17, 2020)

Have a house to sell?

Find Out How Much Your Home Is Worth (optional)

We just need your phone number to finish creating your account.